The increase in water levels is causing drastic beach erosion, much like what we experienced in the mid-1980s and again in the mid-to-late 1990s. During these times homeowners built seawalls and jetties to keep their properties from being destroyed. After the water began to recede, the seawalls and jetties were buried under the beach sand. With the current rise in water levels the buried structures are reappearing. I am documenting this event with fine art.

There’s no telling when the waters will stop rising, but when the water finally recedes, the seawalls once again will be buried and forgotten until, in ten to fifteen years, Lake Michigan begins its cyclical rise. 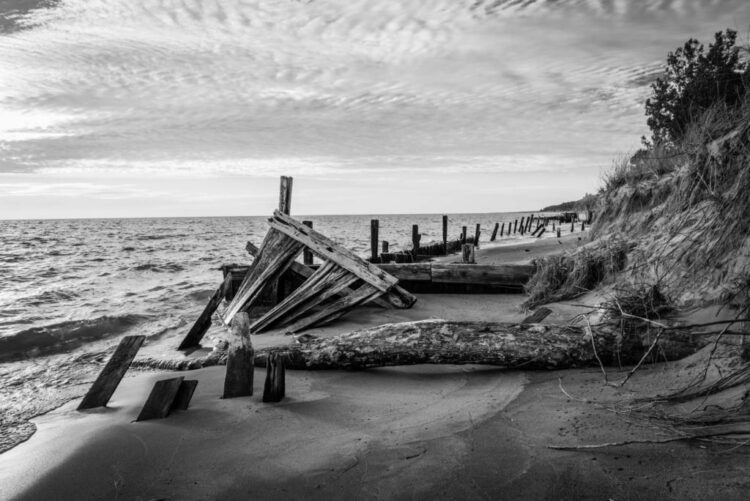 The measurements at the left are feet above sea level and are measured by a series of gages used by the U.S. Army Corps of Engineers and Environment and Climate Change Canada to compute lakewide average water levels. This  is done by first computing daily averages at each gage and then computing a lakewide average using all the gages on the lake. 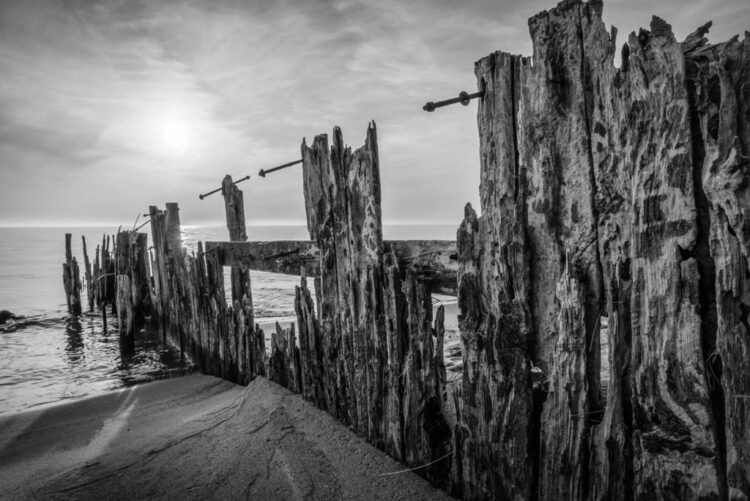 History of the water levels:

To view the chart below, right click on the chart, and save it to your computer, then open the image on your computer so you can zoom in for more details.

A VIEW FROM ABOVE

LEFT SIDE 2013. RIGHT SIDE 2018. PHOTOS FROM GOOGLE EARTH.
DRAG THE ARROWS TO SEE THE DIFFERENCES. 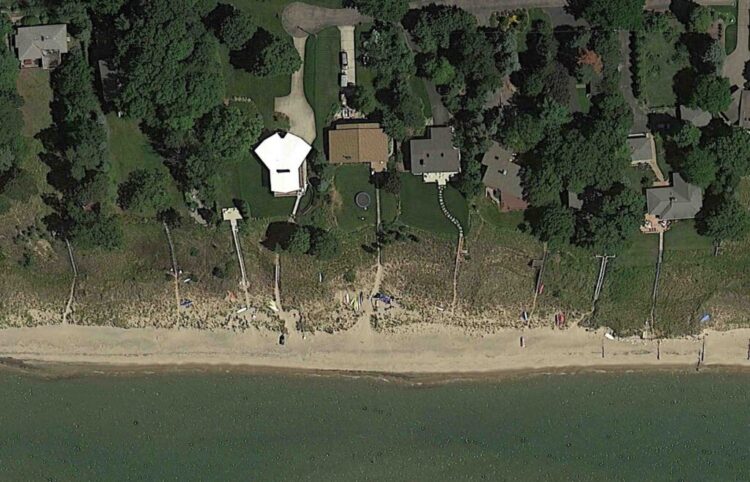 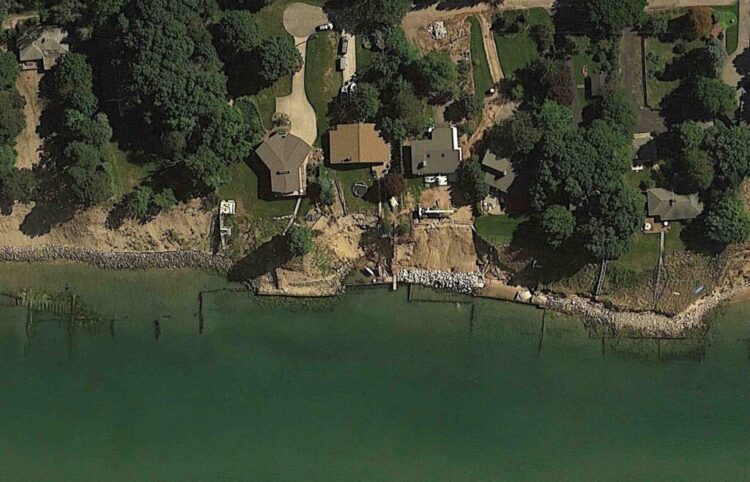 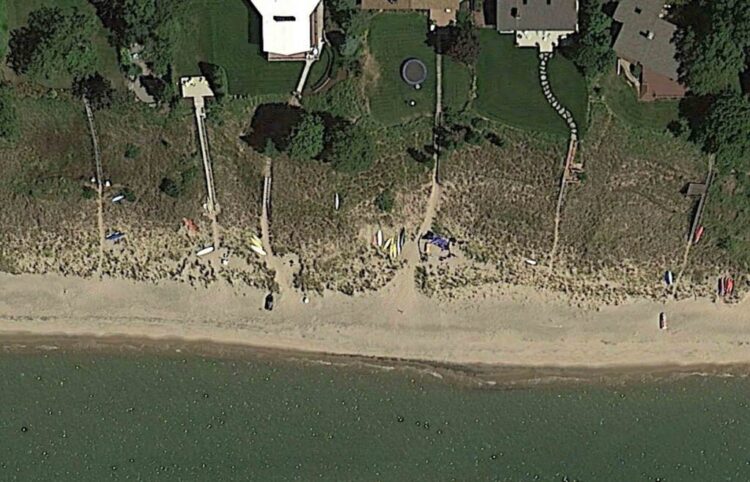 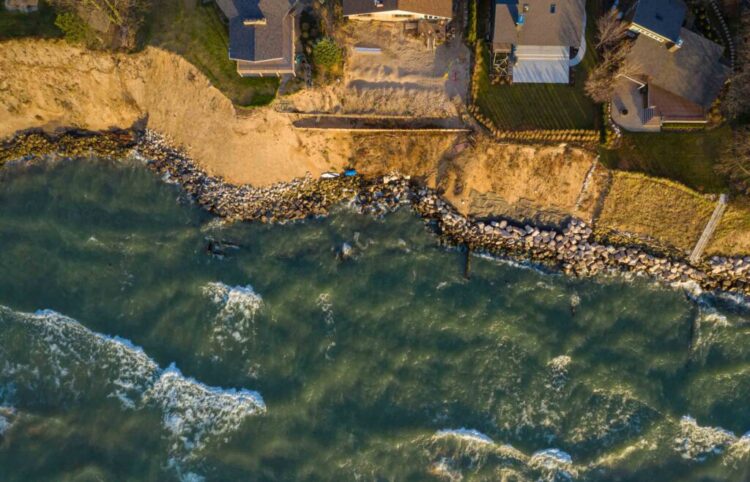 January 2013 Lake Michigan was at a record low.
This was the summer just before one of the hardest winters in decades. 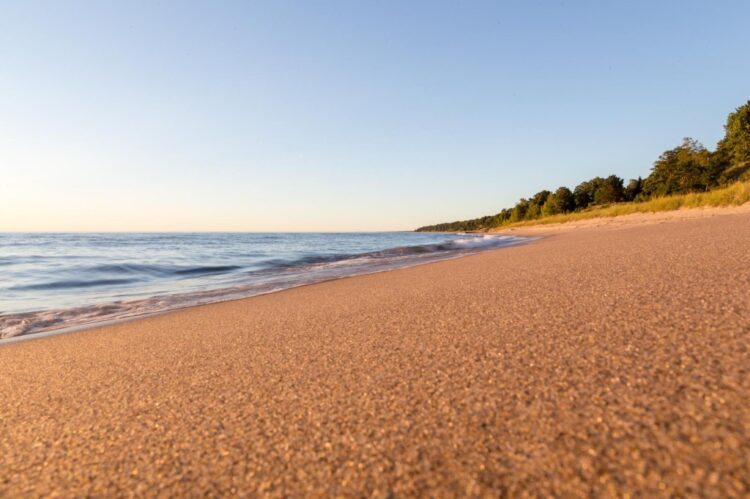 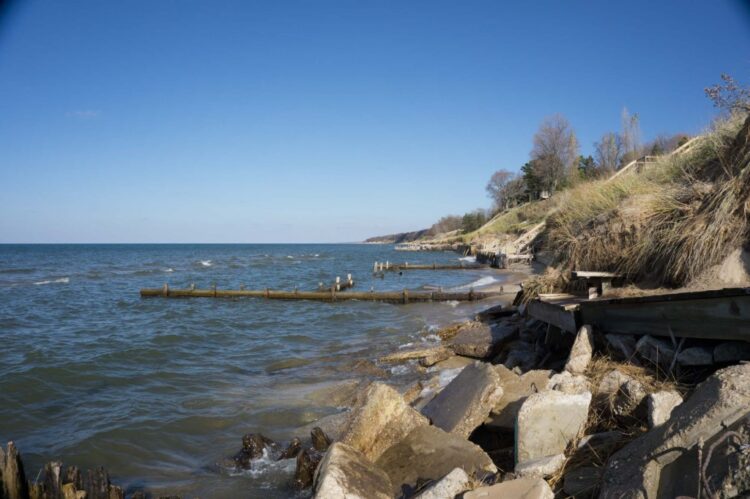 The winter of 2013/14 brought with it very severe weather, 93% ice coverage, and prolonged days of very cold temperatures. These conditions kept water in Lake Michigan from evaporating, contributing to the drastic rebound of the lake’s levels. 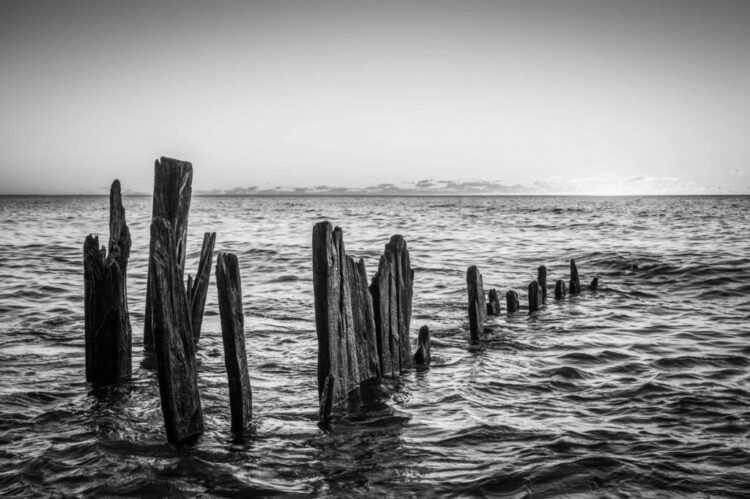 It’s impossible to get into the same positions to get the same image, due to erosion and water. 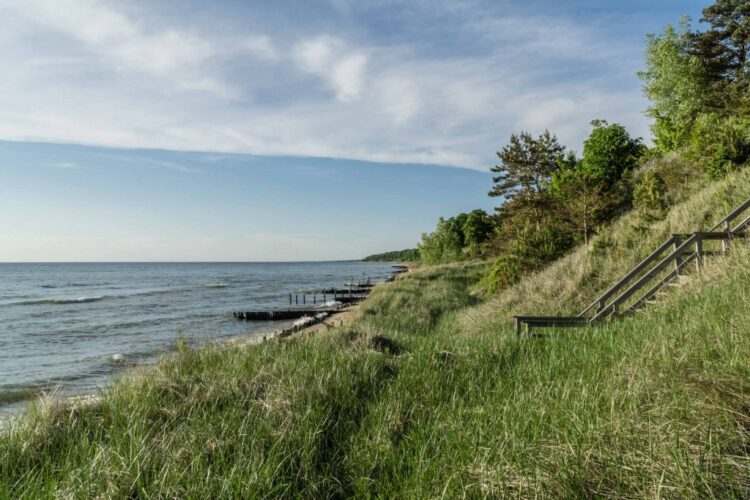 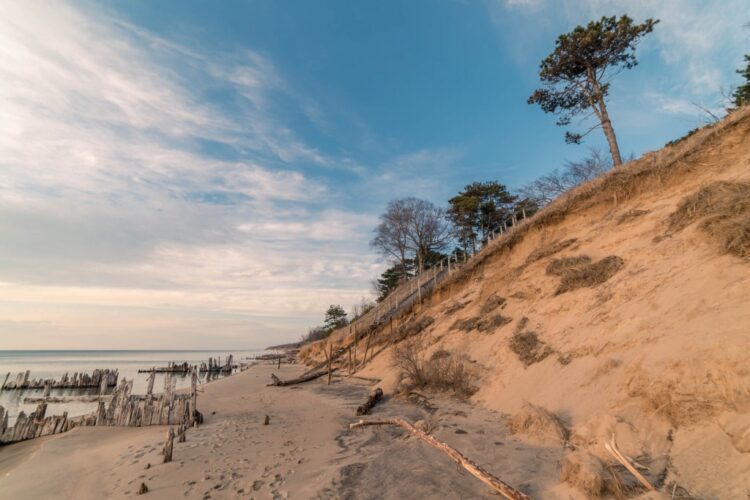 Because the previous winter was an El Niño year, the lake’s ice coverage was less than 30% which should have allowed a considerable amount of water to evaporate, but the opposite seems to have happened. As of this writing Lake Michigan’s water level is higher today than it was in December of 2015. 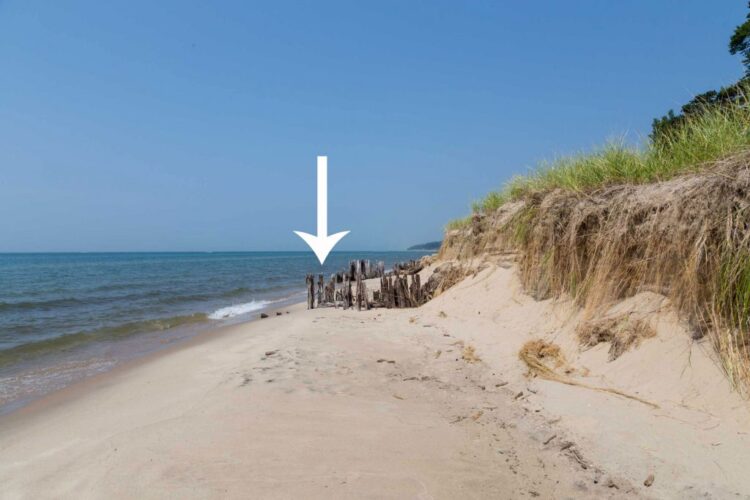 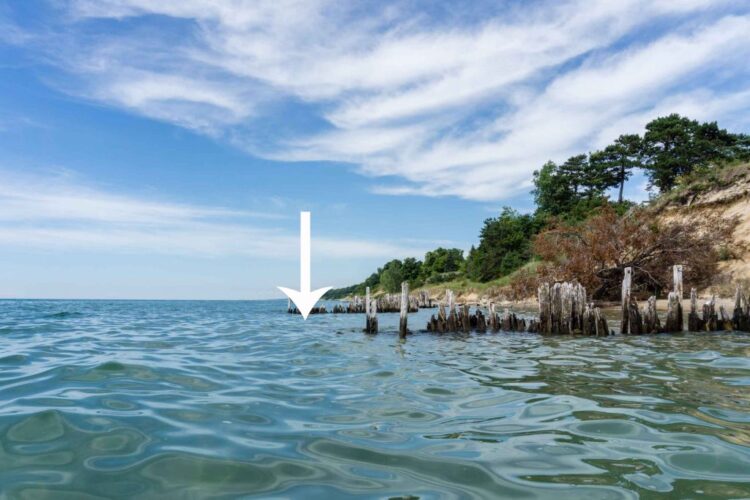 LAKE LEVELS INCREASED FROM APRIL BY ALMOST ONE FOOT. HISTORICALLY THE LAKE’S LEVEL PEAKS IN JULY, BUT IN 2013 IT PEAKED IN NOVEMBER. STAY TUNED TO FIND OUT WHAT HAPPENS THIS YEAR. 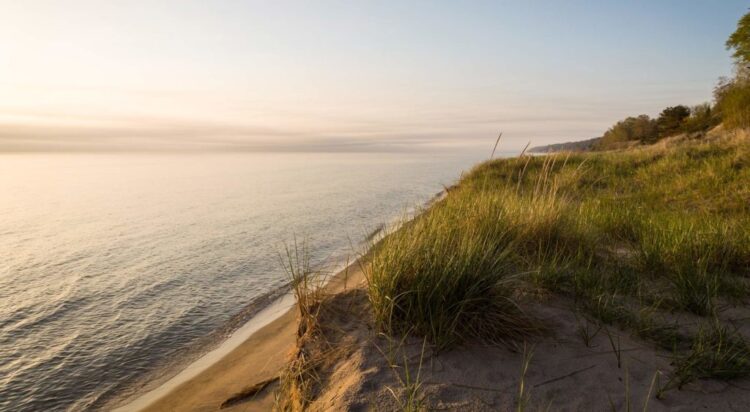 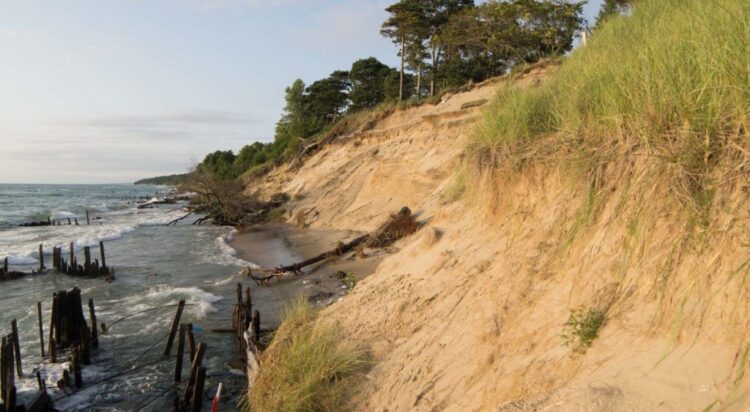 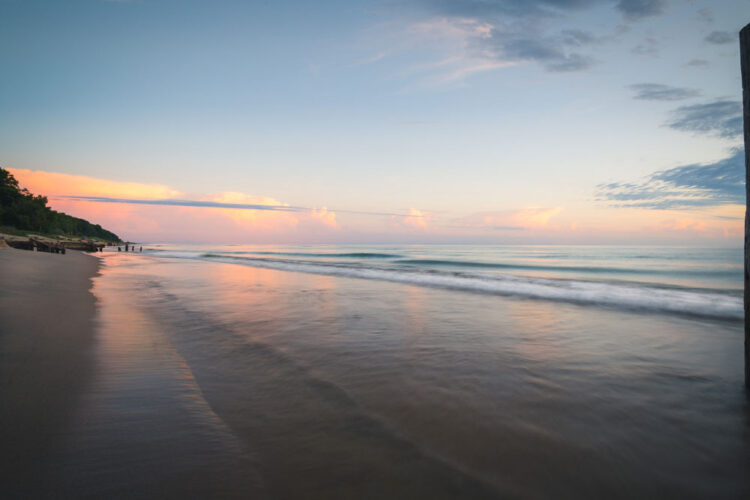 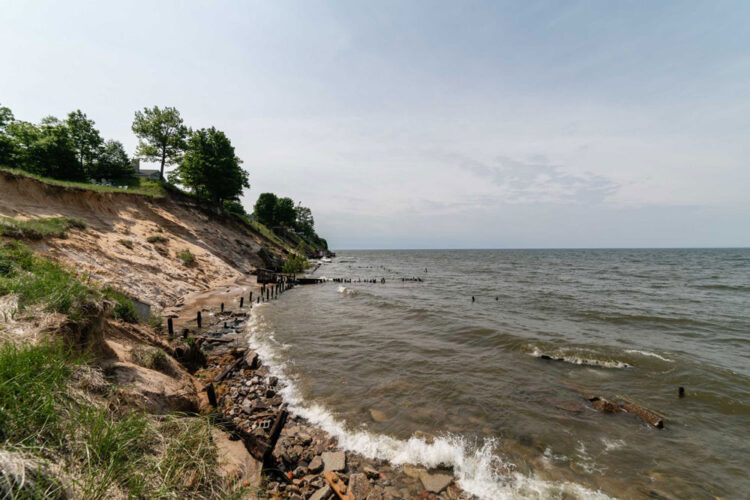 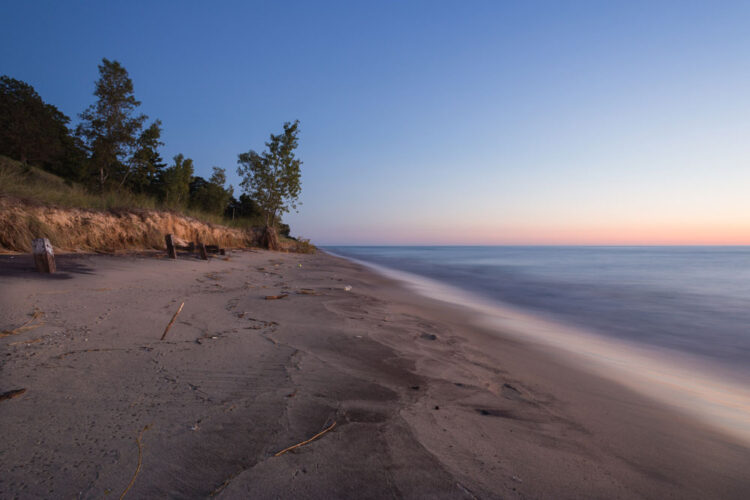 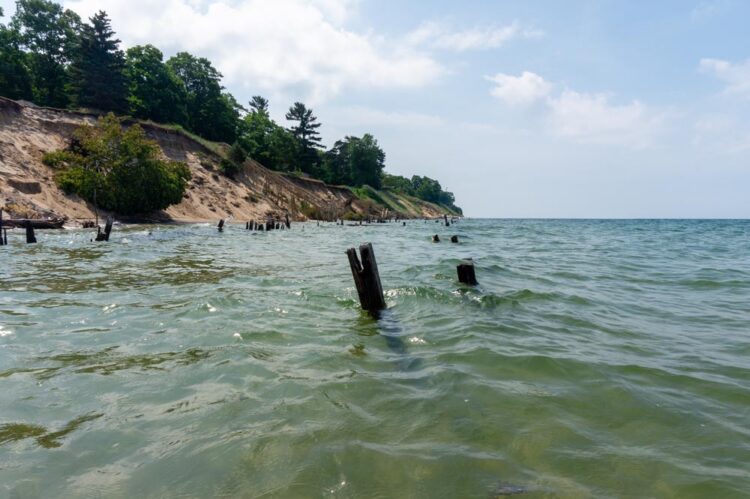 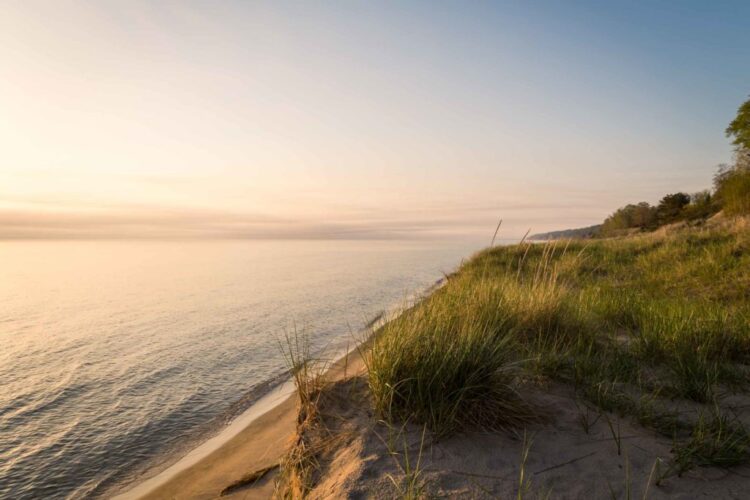 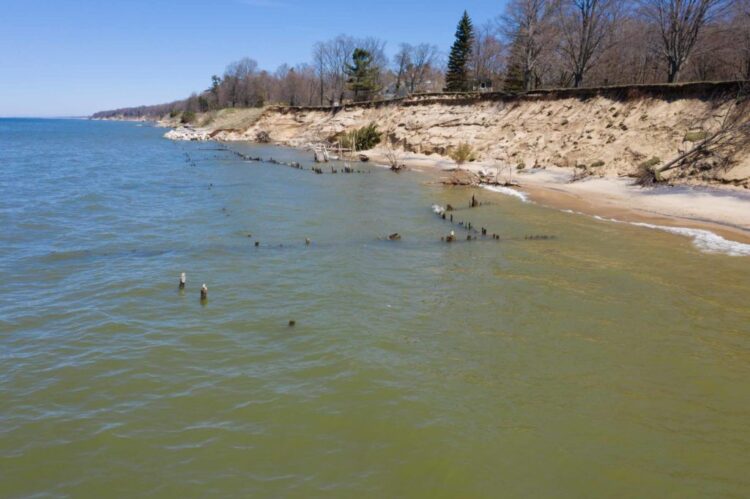 SOME MONTHLY RECORDS WERE BROKE, BUT NOT THE ALL TIME HIGH 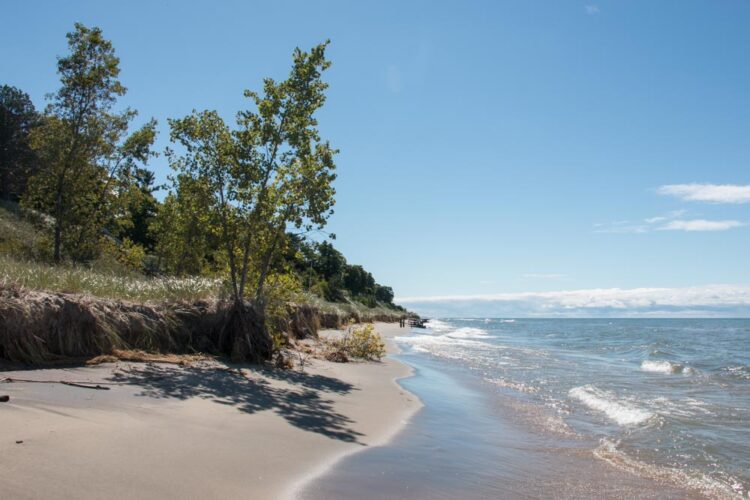 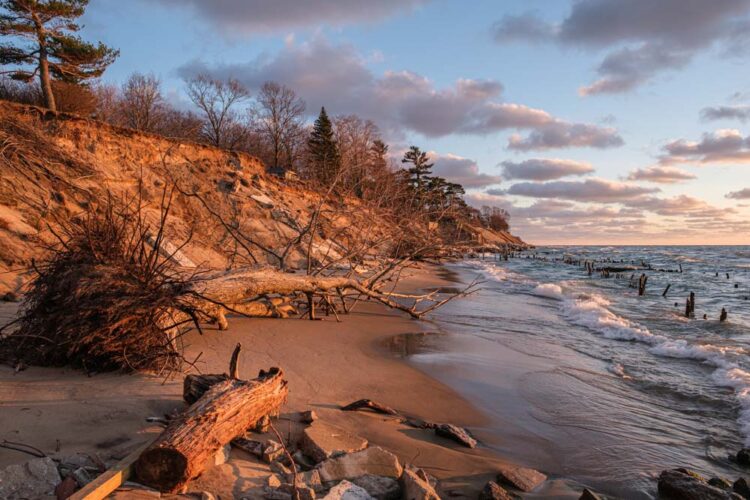 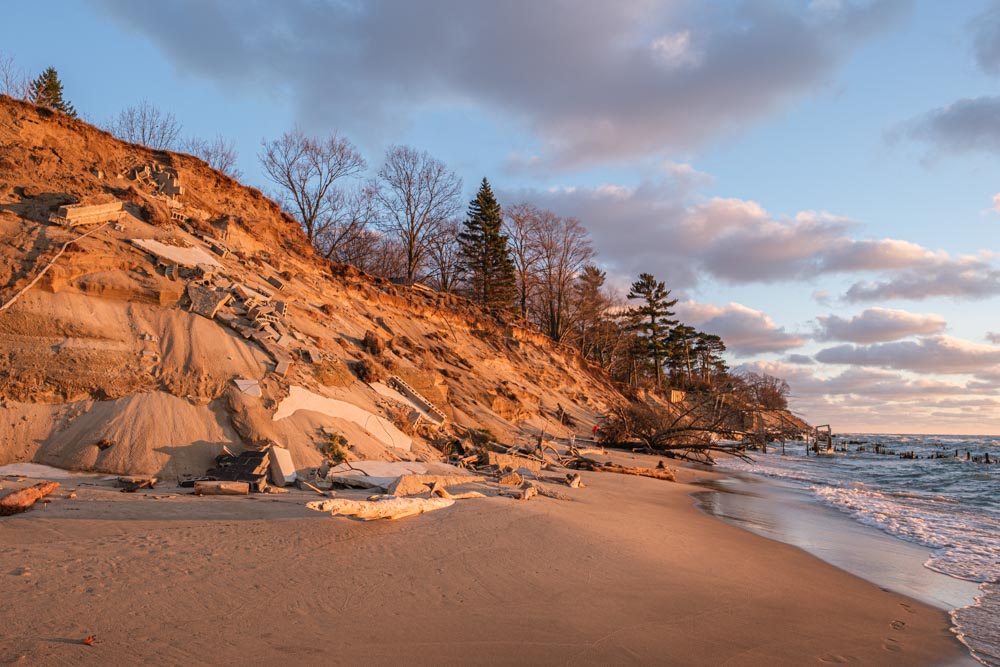 Remains of the foundation

Here you can see the remains of a house foundation. I was speaking to the owner who explained how these remains are actually from where the house once stood, and was the third location that they’ve moved the house to.

He went on to tell me how they had to move the house four different times, about 90 feet each time in order to keep the house from falling into the lake. 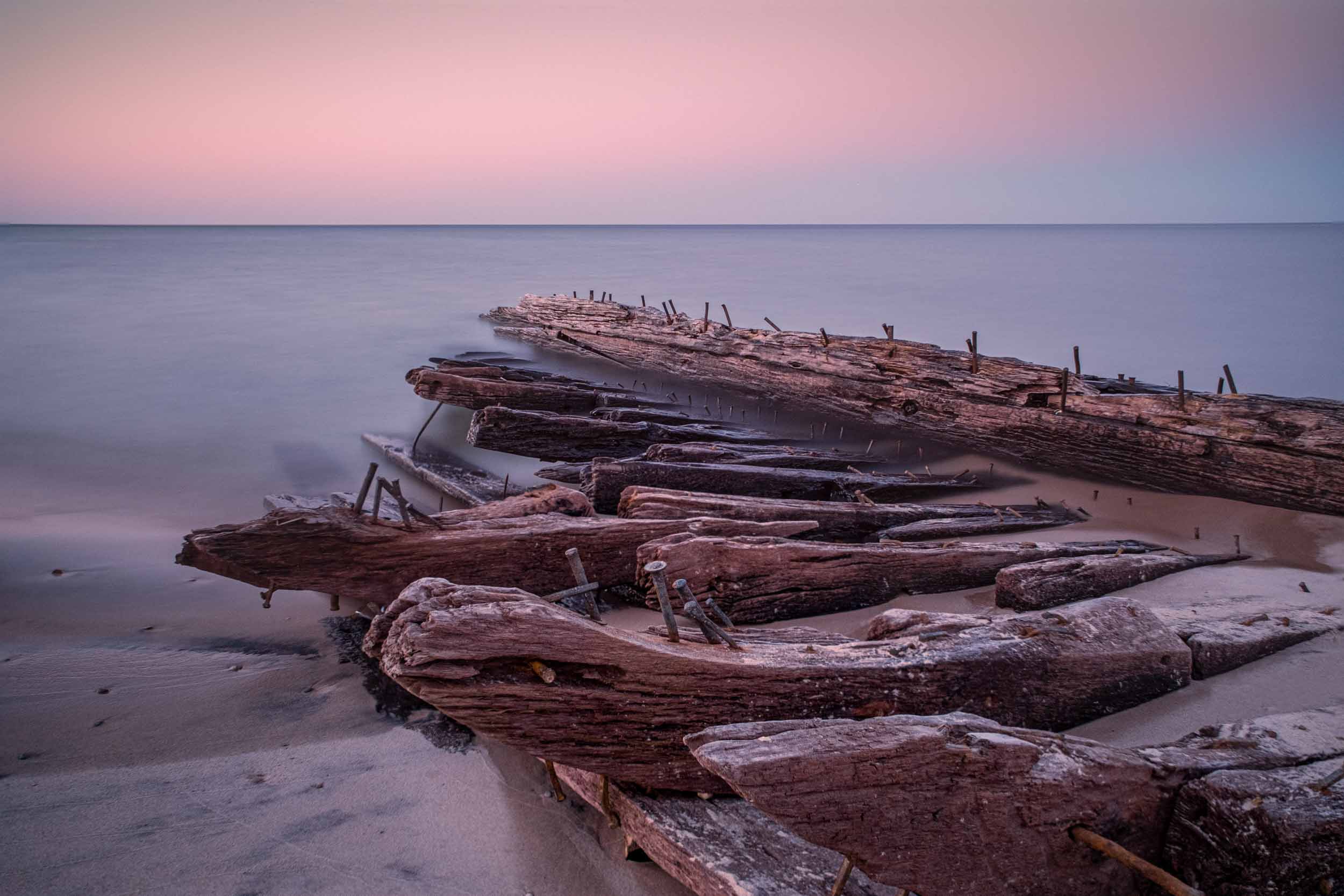 According to records there was a storm in early October 1882 and reports that the Contest came up onto the beach trying to get into the White Lake channel. The ship is located at the base of the White Lake Lighthouse in Whitehall, Michigan.

This is the year we high an all time high

Water is trending down