MORE LIGHTHOUSES THAN ANY STATE IN THE USA

St. Joseph was first platted in 1829, and the first lighthouse at the site, located on shore, was built in 1832. Construction began on harbor piers in 1836, and by 1848 a beacon light had been established on the pier. – WIKIPEDIA 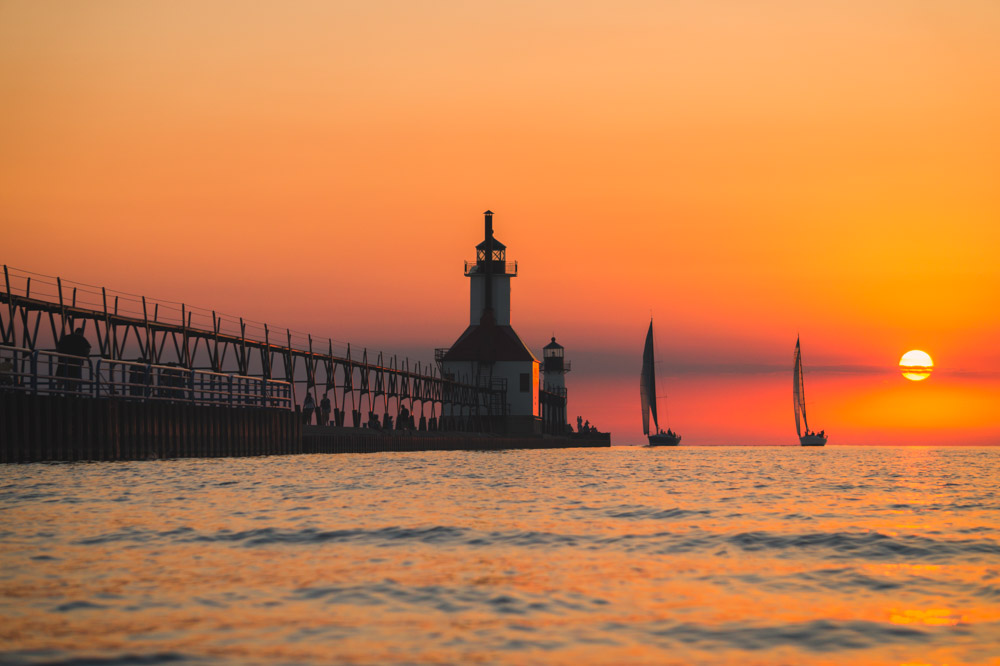 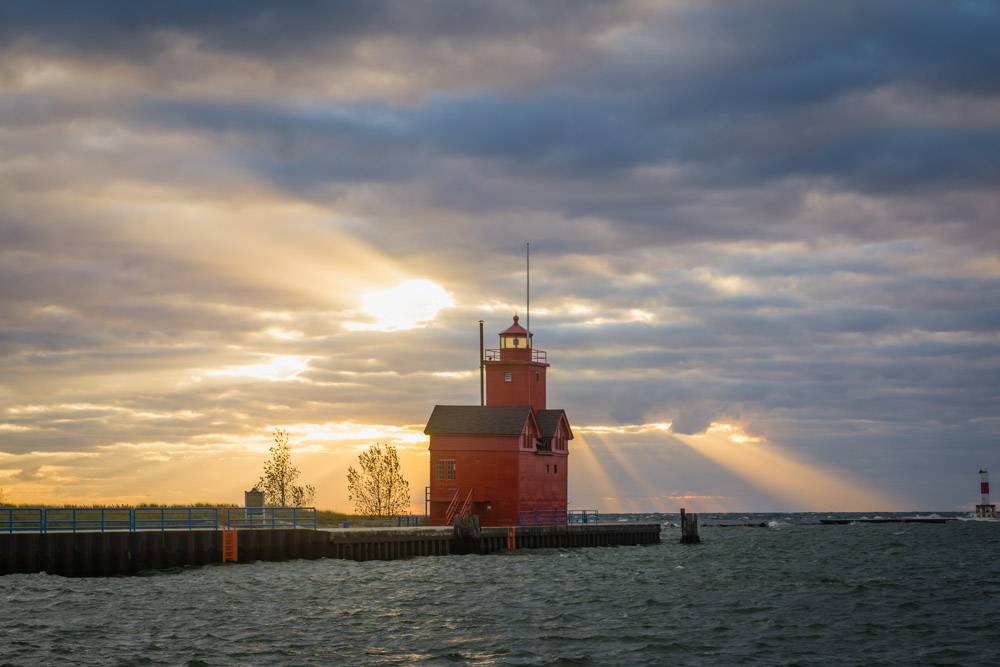 The first lighthouse built at this location was a small, square wooden structure erected in 1872. In 1880 the lighthouse service installed a new light atop a metal pole in a protective cage. The oil lantern was lowered by pulleys for service. At the turn of the century, a steel tower was built for the light and in 1907 the present structure was erected. Named the Holland Harbor South Pierhead Lighthouse, it has a gabled roof that reflects the Dutch influence in the area. – WIKIPEDIA

Grand Haven South Pierhead Inner Light is the inner light of two lighthouses on the south pier of Grand Haven, Michigan where the Grand River enters Lake Michigan. A lighthouse was first lit there in 1839. – WIKIPEDIA 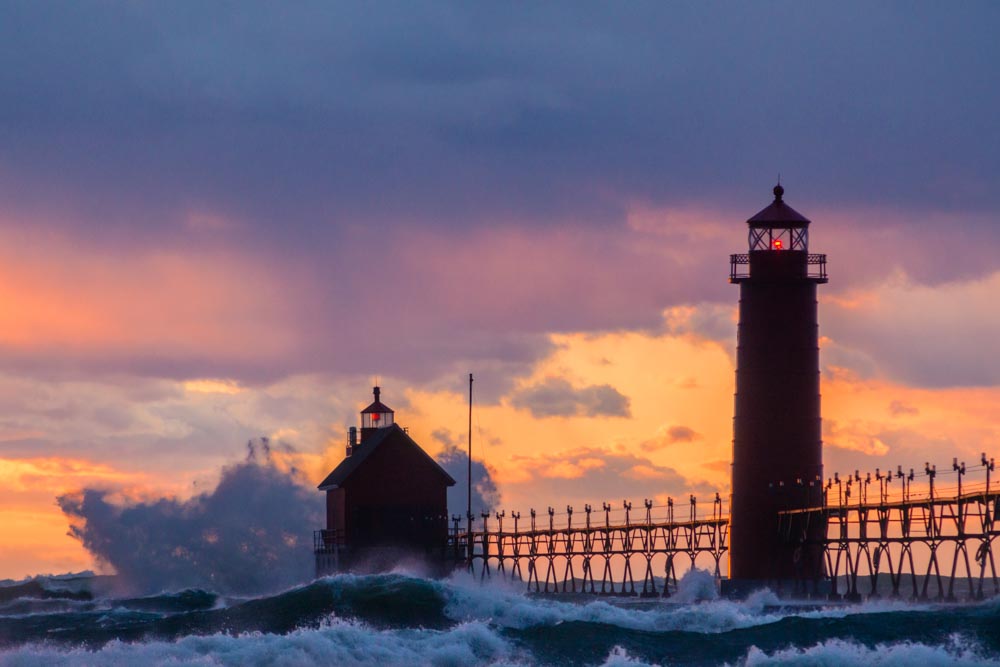 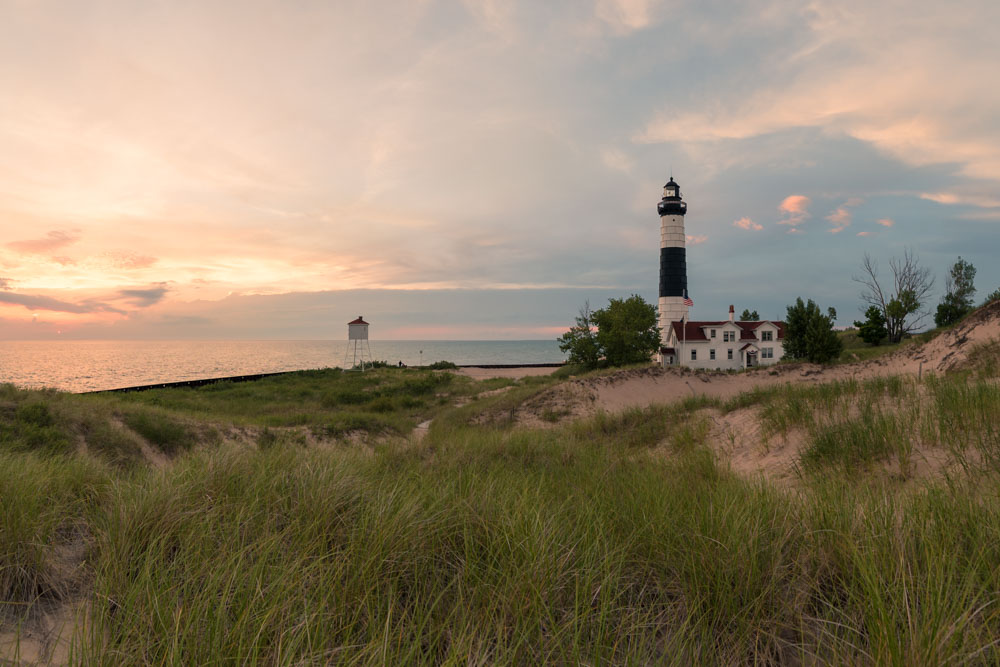 On July 28, 1866, Congress appropriated $35,000 for a new lighthouse at Big Sable Point. Approximately 933 acres was deeded from the State of Michigan to the U.S. at no cost and in early 1867 construction began, making it the first light station in the area.

Built in 1867, the 112-foot (34 m) tower was originally made of yellow cream brick. It has a focal plane of 106 feet (32 m). The building was made of so-called Cream City Brick. The brick deteriorated and was thereafter covered with boiler plate in 1900. – WIKIPEDIA

Following the loss of the Schooner Pride in 1866, public outcries for a light at this locale were finally heard and heeded. Congress approved funding in 1871, but construction was delayed until 1874 due to lack of roads to the site.

The station was originally named “Petite Pointe Au Sable Lighthouse”, which is the name used on most official records; officially, however, the name was changed in 1910. Although commonly called “Little Sable Point Light”, it is listed by the National Park Service as “Little Point Sable Light”. The lantern room has eight fixed panels in its lower section, and the upper has ten rotating panels. – WIKIPEDIA 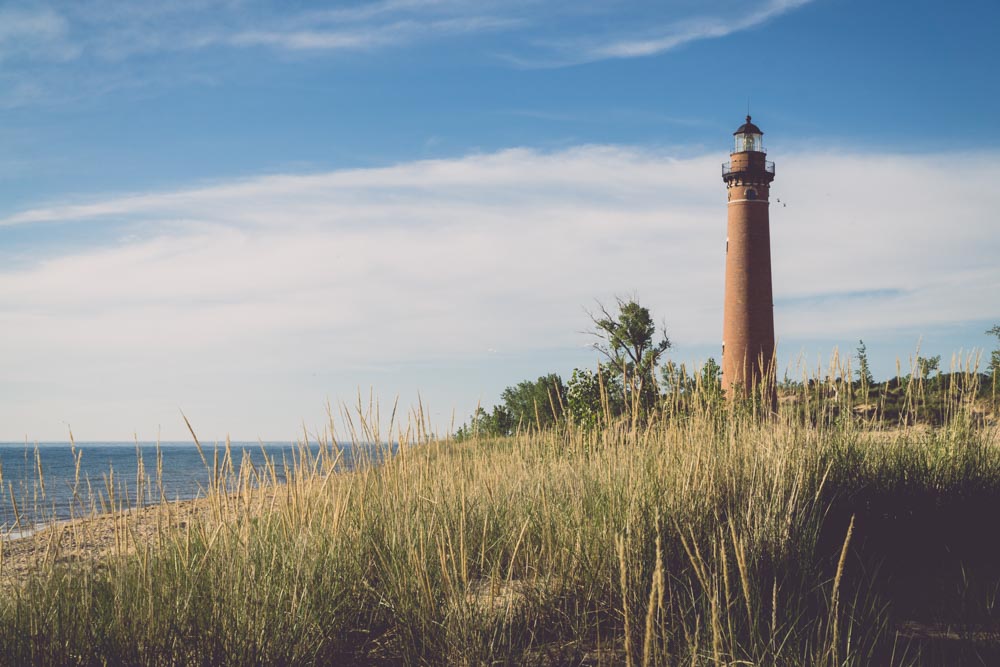 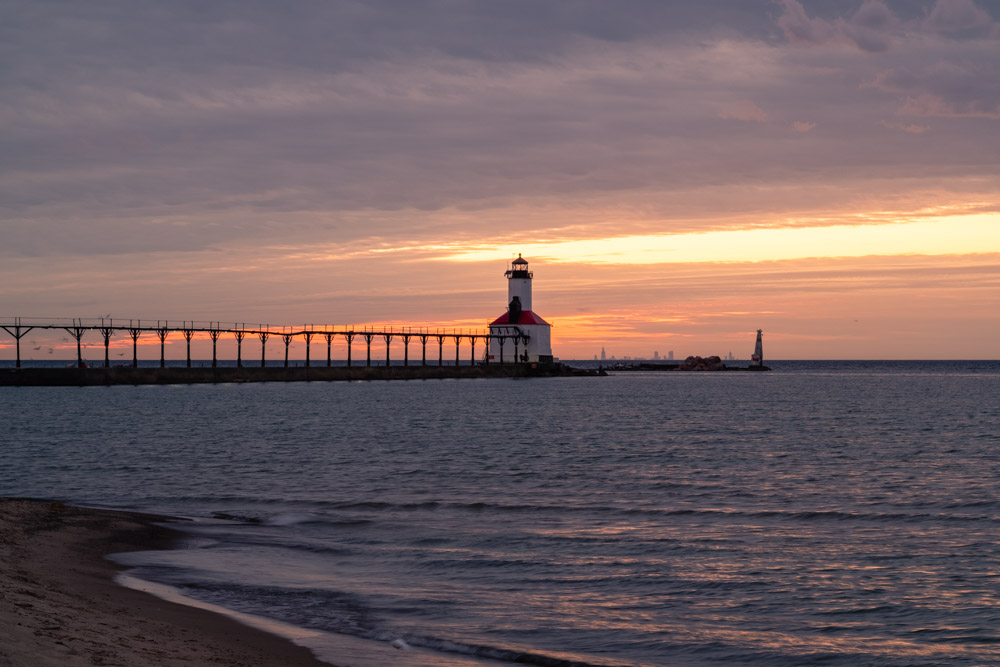 The Michigan City Breakwater lighthouse is located in the harbor of Michigan City, Indiana. This is the successor to the Old Michigan City Light, when the lantern, lens and light was moved to the new light at the end of the newly extended pier. – WIKIPEDIA 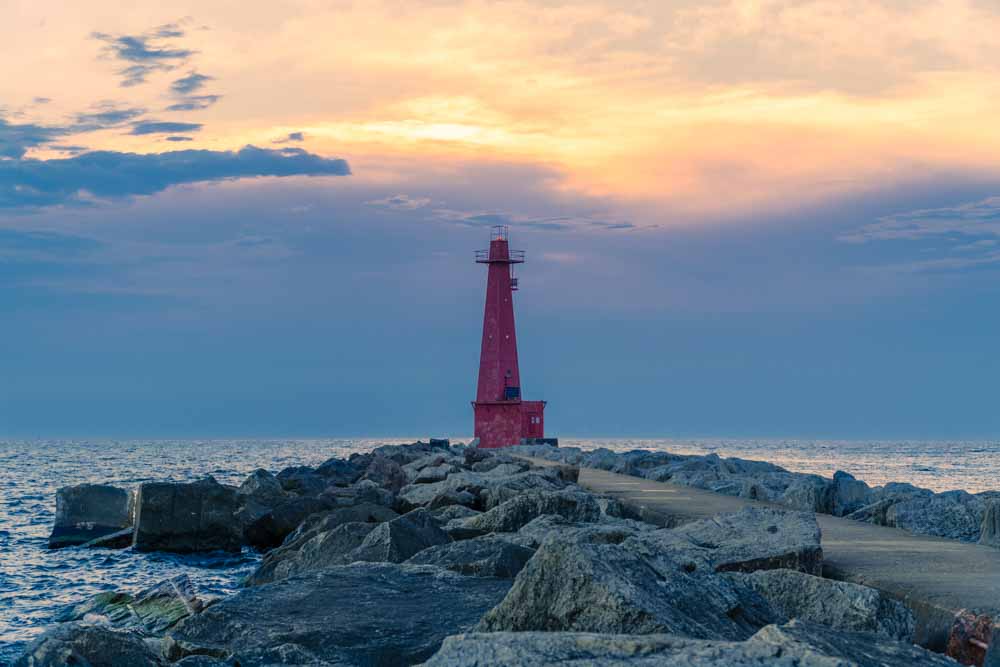 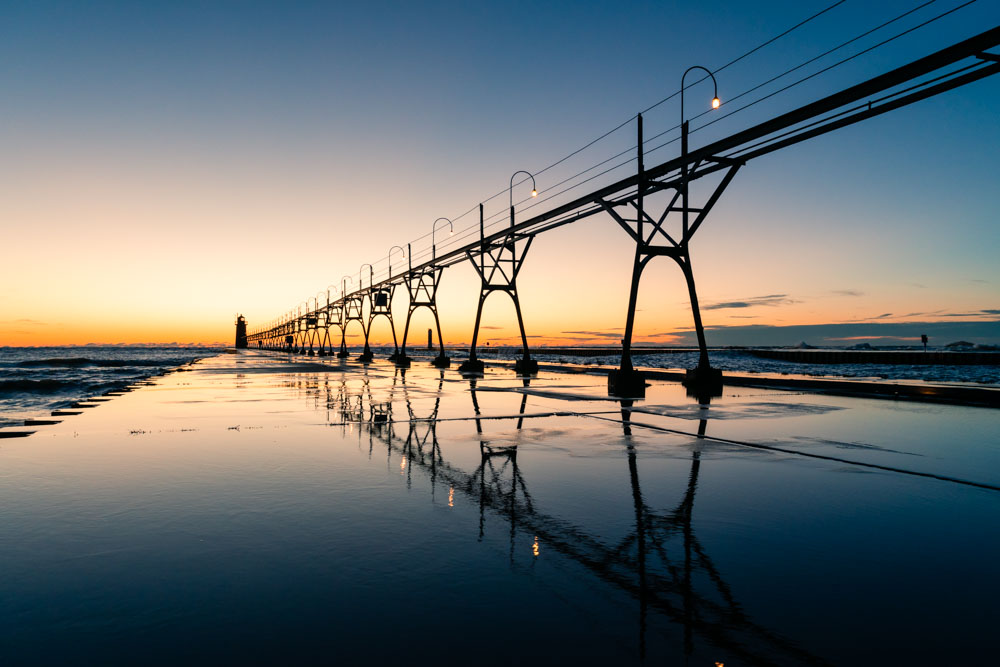 The South Haven South Pierhead Light is a lighthouse in Michigan, at the entrance to the Black River on Lake Michigan. The station was lit in 1872, and is still operational. The tower is a shortened version of the Muskegon South Pierhead Light, and replaced an 1872 wooden tower. The catwalk is original and still links the tower to shore: it is one of only four that survive in the State of Michigan. – WIKIPEDIA

The harbor at Frankfort was first dredged in 1859. A series of improvements were begun in 1867, with piers completed in 1873. The original Frankfort North Breakwater lighthouse, an enclosed timber-framed pyramid beacon, was built in 1873 at the end of this long wooden pier with an elevated catwalk which led to the shore; the light was first lit on October 15, 1873. A fog signal was added in 1893. – WIKIPEDIA 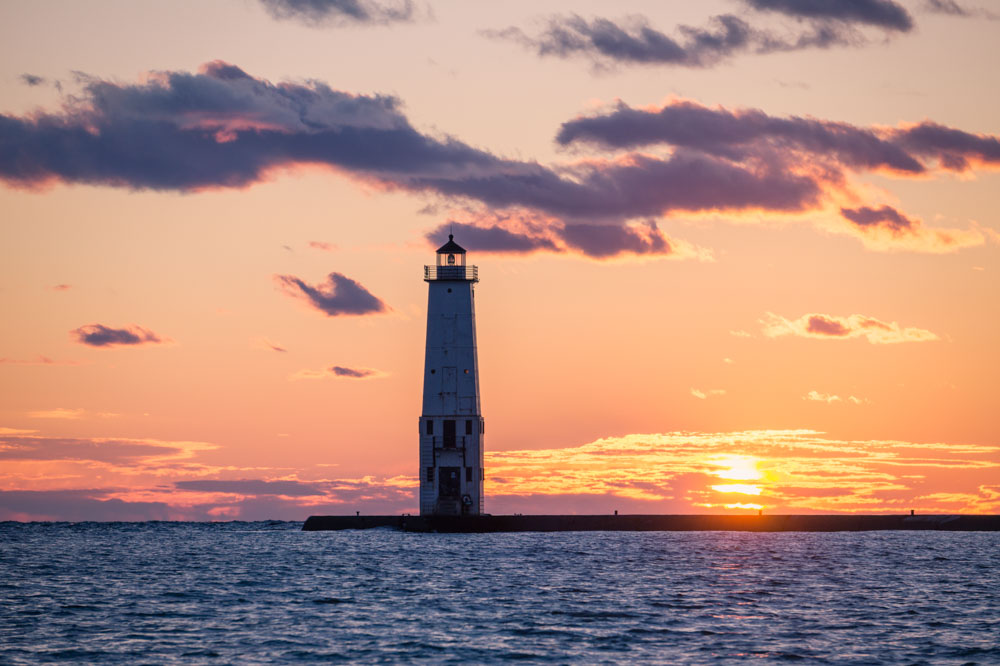 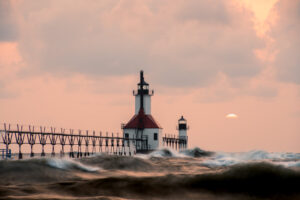